Pilar Akaneya is a safe restaurant.

Learn about our measures against COVID-19. 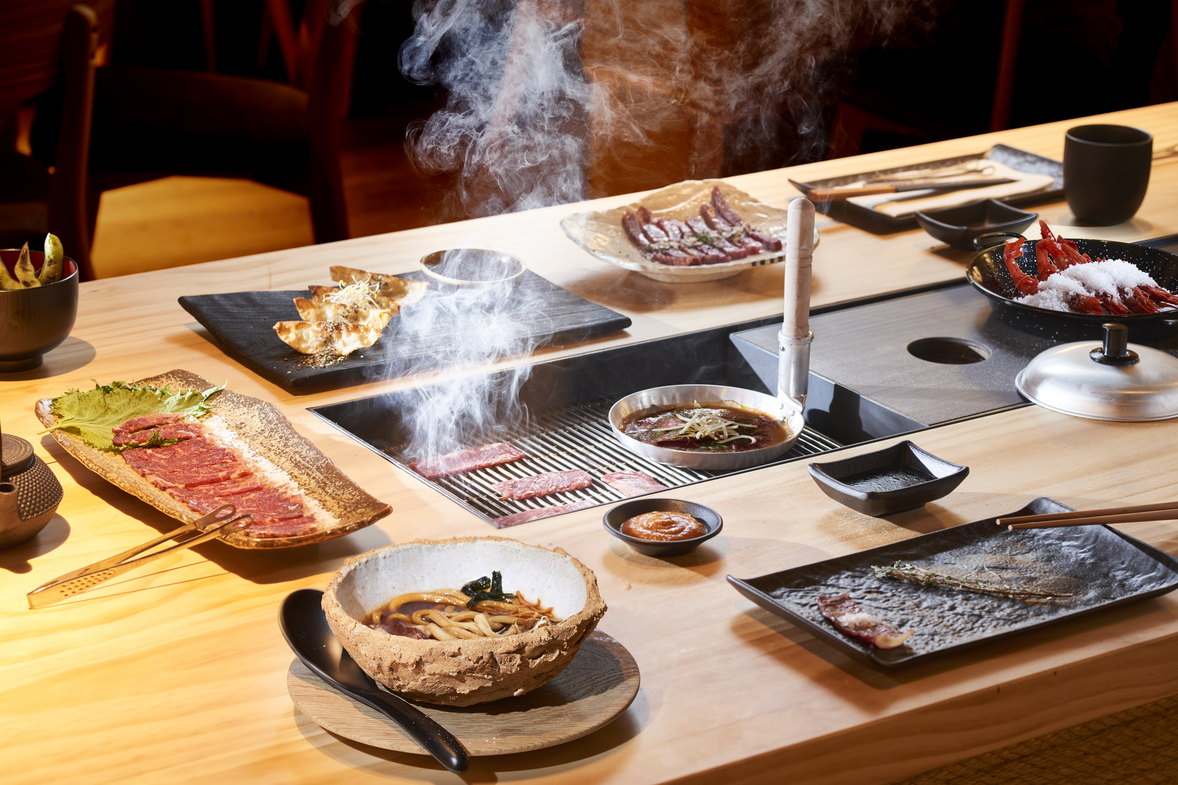 On July 17, 2020, Pilar Akaneya opens, the first sumibiyaki in Madrid and one of the four restaurants in Spain that serves wagyū certified as Kobe Beef. Also, it is the first establishment in Europe to serve the Japanese Crown Melon muskmelon. This is the cover letter of a story that takes us to its founders, Chiho Murata and Ignasi Elías.

Nine years have passed since the opening in 2011 in Barcelona of Europe's first sumibiyaki, the iconic Carlota Akaneya. Ignasi assures that he then only opened it with his heart and, almost a decade later, "he had to turn what he had learned into a new project."

He owes part of the learning to his partner, Chiho Murata, a native of Fukuroi. Among her childhood memories are winters by the fire making mochi with her grandmother and collecting firewood with her grandfather to make their own charcoal. 20 years later, Chiho will become the filter of all the decisions of a Sumibiyaki in Madrid.

"Pilar Akaneya was called to exist one day," Ignasi responds, referring to Pilar, his mother's name. "I owe it to her," he smiles. This is also seen by Jordi Rivera, director of operations and the main person in charge of the prophecy being fulfilled. "The piece that makes everything work", Ignasi defines him. Jordi was a regular at Carlota Akaneya when Ignasi suggested opening a second restaurant with him. "I wasn't expecting it," explains Jordi. "If what Ignasi was looking for was the heart, he was right because I put my soul into it." 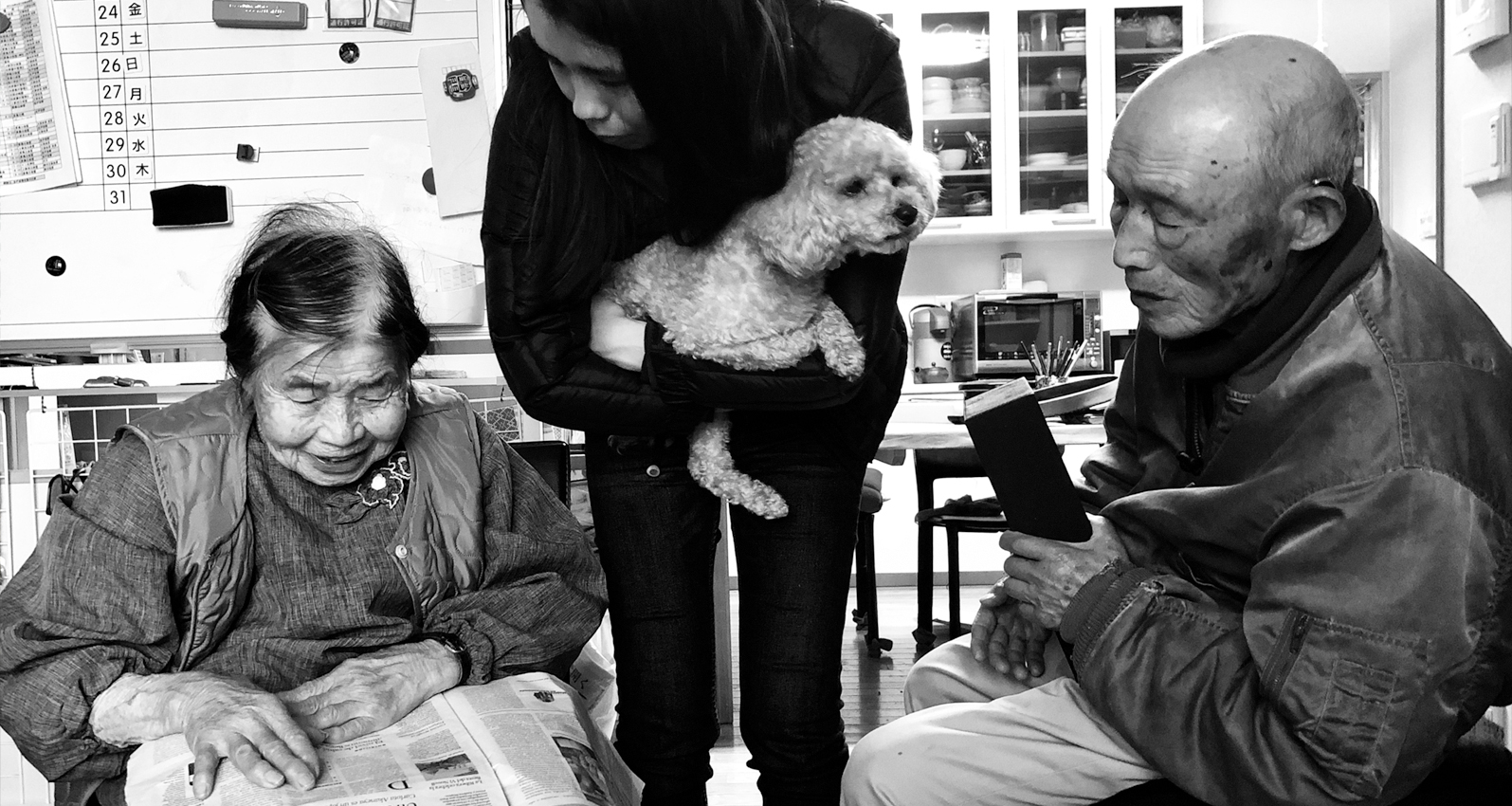 Abril 2019 – Chiho with Take and Kenji Murata, at their home in Fukuroi, comment on an article about Carlota Akaneya in La Vanguardia

KOBE BEEF
Pilar Akaneya is one of 150 restaurants outside of Japan certified by the Kobe Beef Association, licensed to sell Kobe beef. There is some confusion about the true meaning of wagyū and Kobe Beef. Simplifying a lot, "it is only Kobe if it comes from the Hyōgo prefecture, with the corresponding 'Kobe Beef' certification," Chiho clarifies. In the case of Pilar Akaneya, we are not only talking about Kobe Beef A5, the most exclusive cut of meat on the planet, but also about pairing with ember. 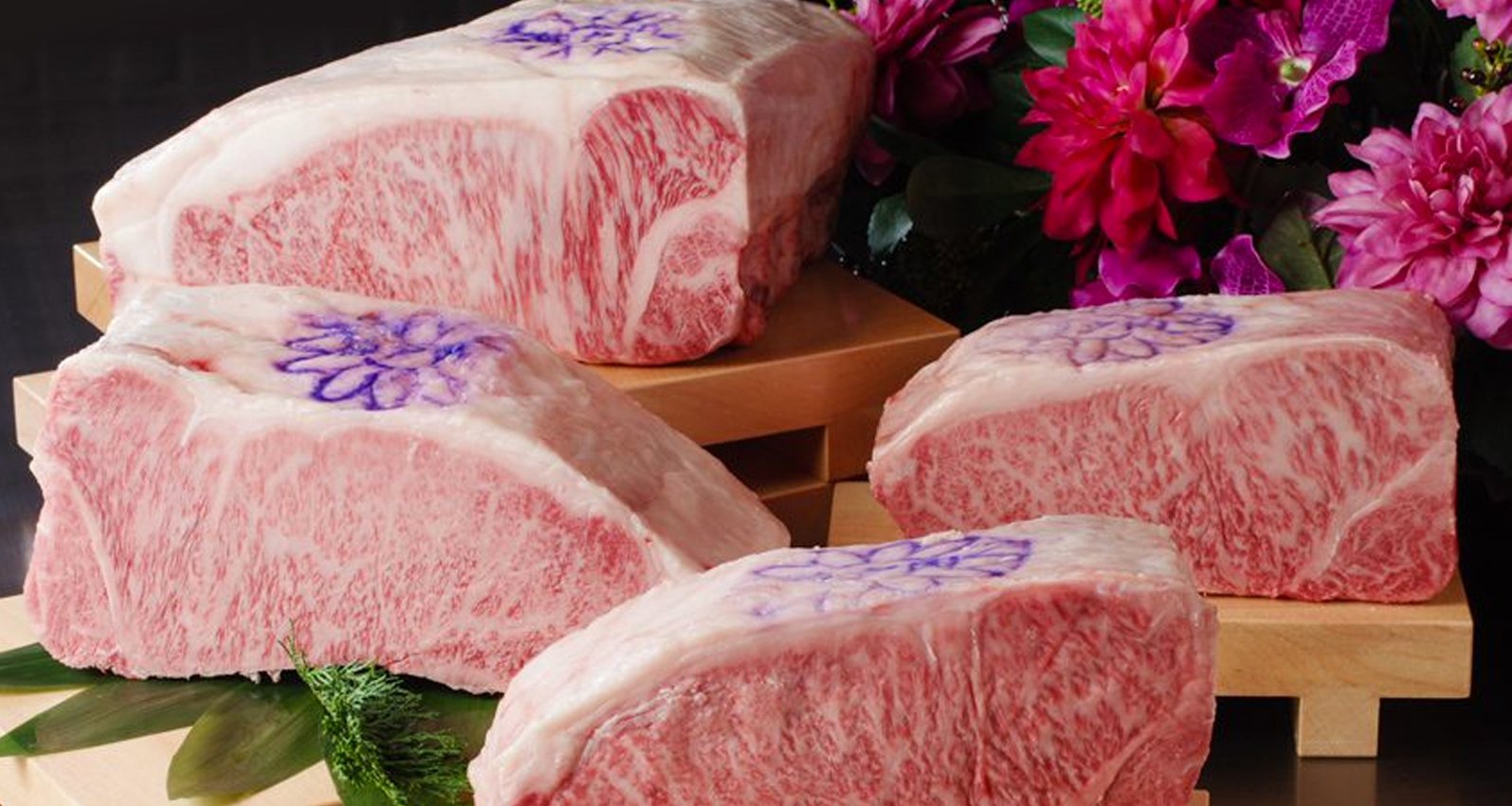 KISHŪ BINCHŌTAN
"I never thought I would have to do a charcoal tasting," confesses José Luís Fernández, director and chef of Pilar Akaneya. "I had heard of Carlota Akaneya when Chiho called", but I had never realized the importance of the ember "until Chiho told me about the Wakayama forests". The restaurant offers the possibility of sublimating Kobe Beef with Kishū Binchōtan from Wakayama, “the best charcoal in the world”, explains Jordi. “Until now this was possible only in Japan. Now, also in Chamberí ”, he assures. 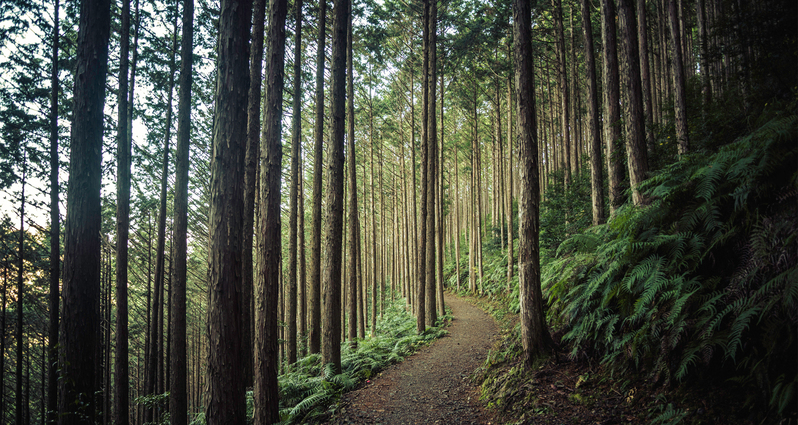 CROWN MELON
It is also the first time that Crown Melon can be tasted in our country. National Geographic was a direct witness of this fact with the completion of the splendid report The world's most expensive melon lands in Spain, published October 22, 2020.
publicado el 22 de octubre de 2020.

Crown Melon is one of the D.O. of Japan's most prestigious muskmelon grown in Chiho's city, Fukuroi. “They come directly from farms near my house,” she explains. In Western culture, it is hard to believe that a melon can cost more than 200 euros, which is the usual price of Crown Melon in stores in Tokyo. The melon has strongly taken roots in the Japanese culture of the luxury gift, to the extent that for certain varieties of muskmelon auctioned in 2019, $ 25,000 have been paid.

Its high price and sweet flavor are partly due to the "one tree, one fruit" standard. Halfway through the harvest, the farmer chooses a single melon, the best looking one, for each tree and slaughters the rest. The list of care and controls that this melon receives is only comparable perhaps to the attention that a mother pays to her baby. "They are like a dream in Japan, and now it is shocking to have them here in Madrid." 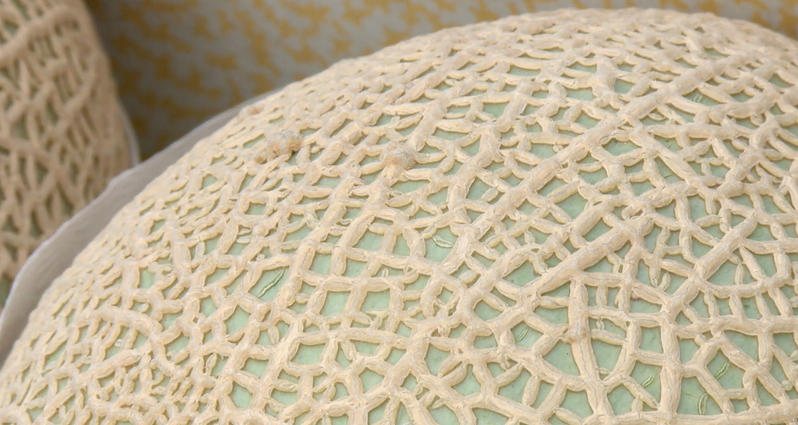 Pilar Akaneya is a popular Japanese cuisine sumibiyaki made with premium products from Japan. Inside, thirteen barbecue tables stand on the floor of two adjoining rooms. The architecture is inspired by Japanese functional minimalism and classic Kyoto aesthetics, where clean and simple lines, natural colors and noble materials such as wood, iron, clay, ash, cotton or rope prevail.

At Pilar Akaneya, beauty and tradition combine to create a calm oasis sifted by rice paper lamps and jazz music, a favorite among the great chefs of Japan. A corner of Madrid where day and night merge to slightly shake the notion of time.

Few things are as captivating as fire, intimacy and omotenashi, aspects that Pilar Akaneya strives to combine properly. Whether it's a first visit or not, as you step on the dotted stone at Pilar Akaneya's entrance and walk through its sliding door, the staff wait inside to welcome you and make you feel both at home and in Japan. 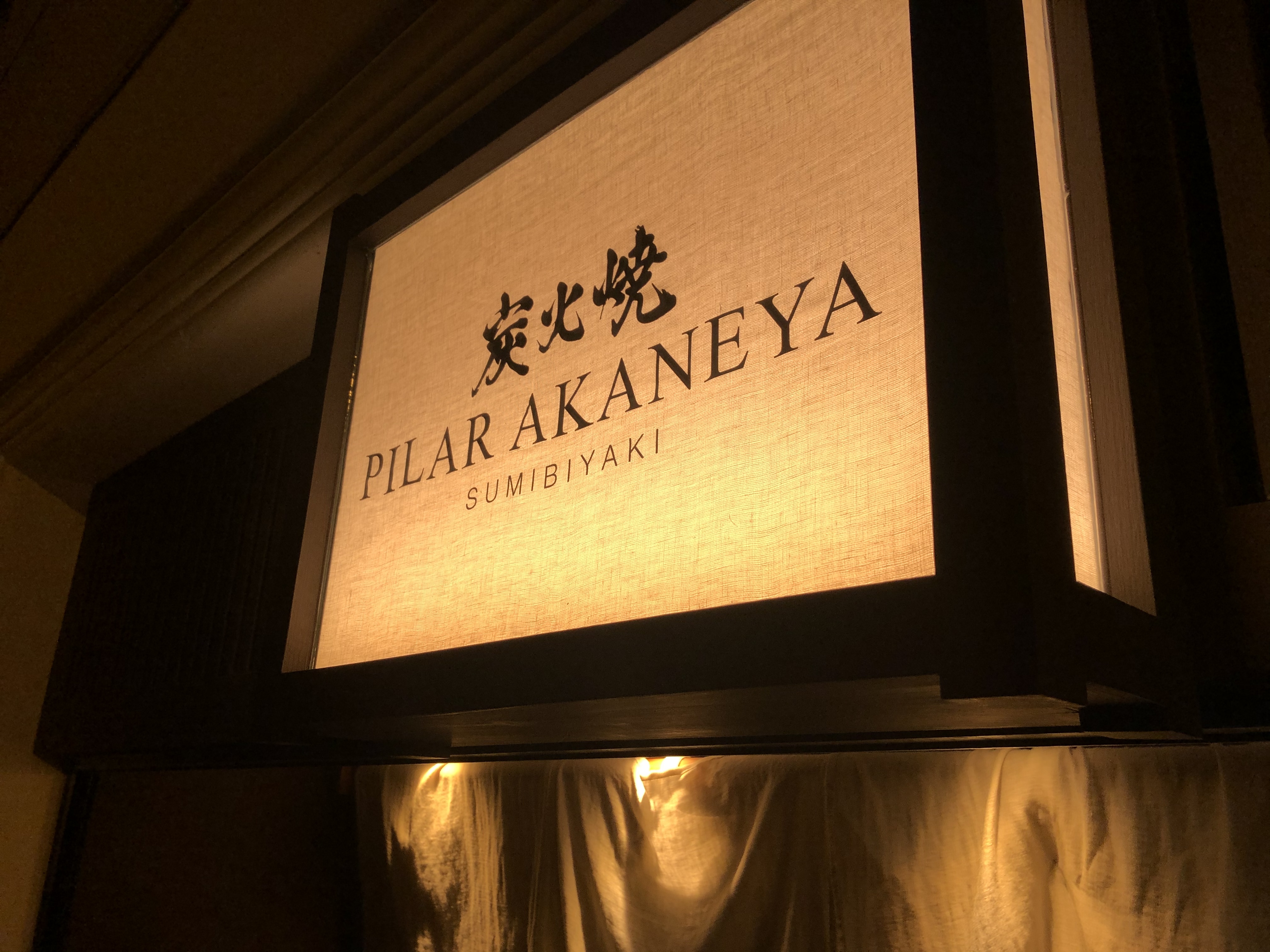 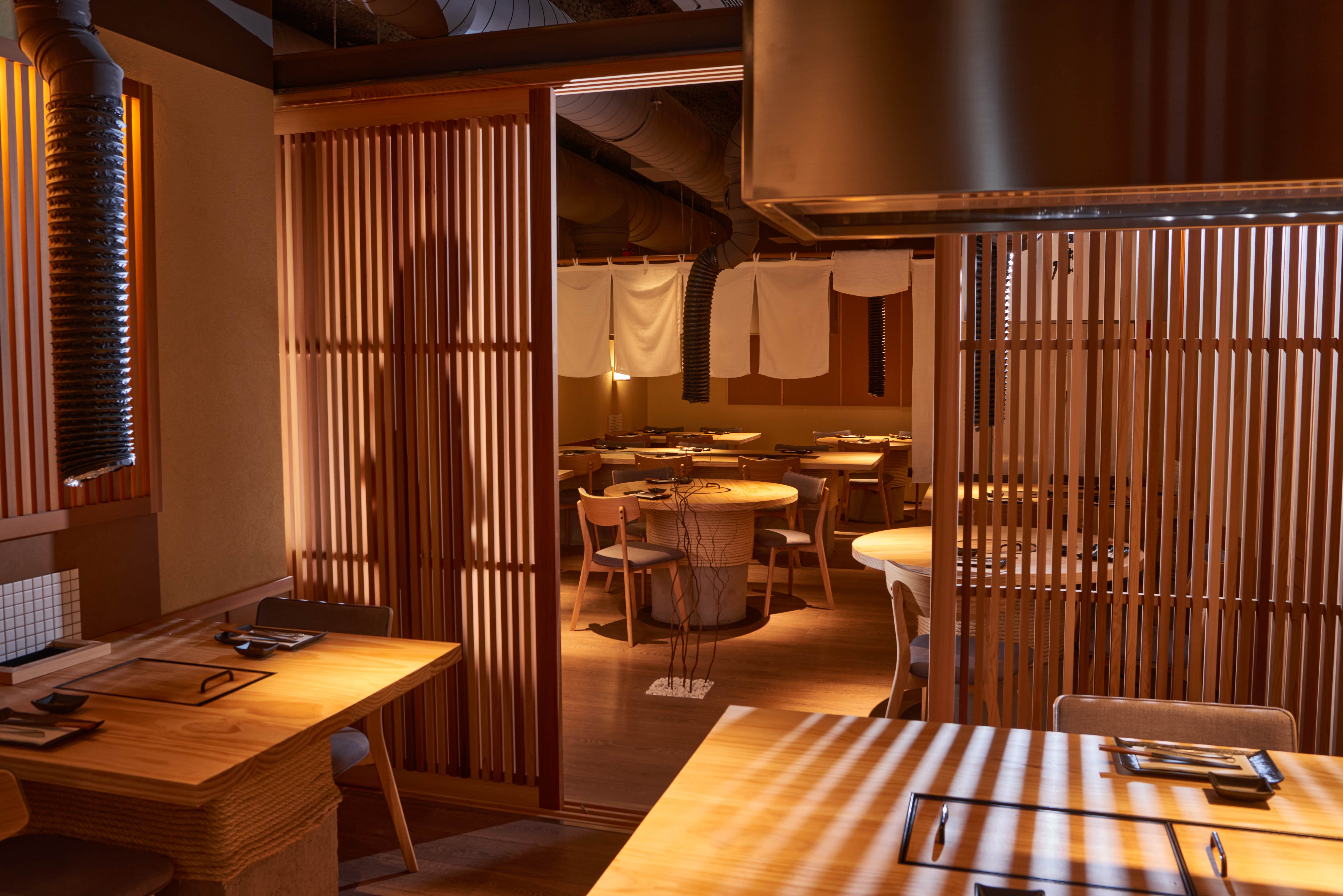 If the basis of pleasure in the kitchen is the raw material, Pilar Akaneya's secret begins in their relationship with the suppliers and the choice of the best possible ingredients. The simplicity of the dishes highlights the prominence of a product that, in any case, is enhanced with a subtle touch. Little is necessary when you have the responsibility of working with certain treasures of nature. Everything must be of the highest quality and prepared to perfection.

Pilar Akaneya does not know if the guest will have a chance to return, so they prepare tasting menus that ensure a wide assortment of flavors and textures from Japan, such as the previous dance that surrounds the barbecue. Each plate has a function within the whole, an intricate and woven story as the course progresses.

The Sansekai Menu reflects a more creative, spontaneous and intuitive personality. Inspiration comes from the food itself and the curiosity for any aspect of Japanese cuisine that brings balance, elegance and flavor to the dishes, with no other pretense than to make those who taste it happy. 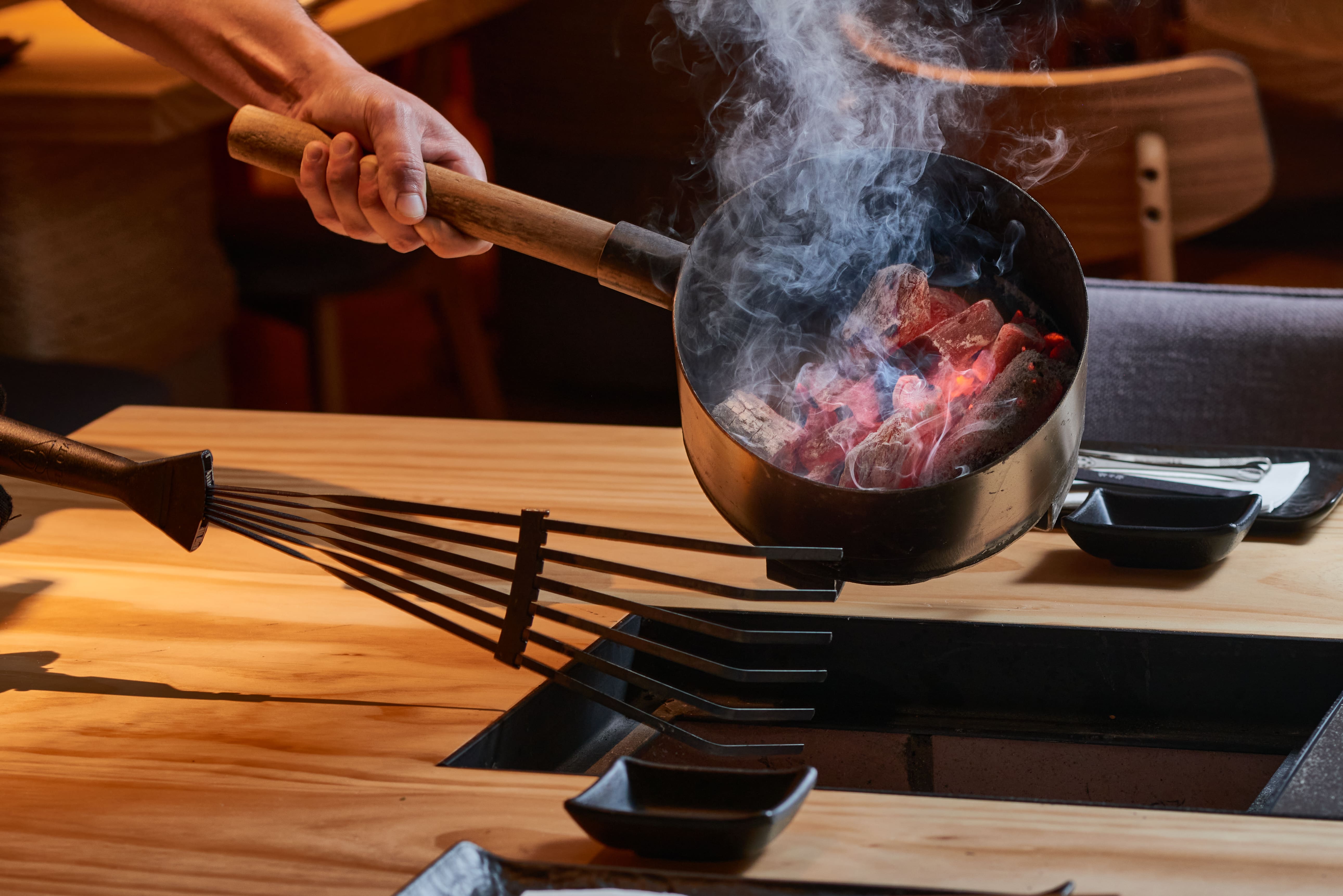 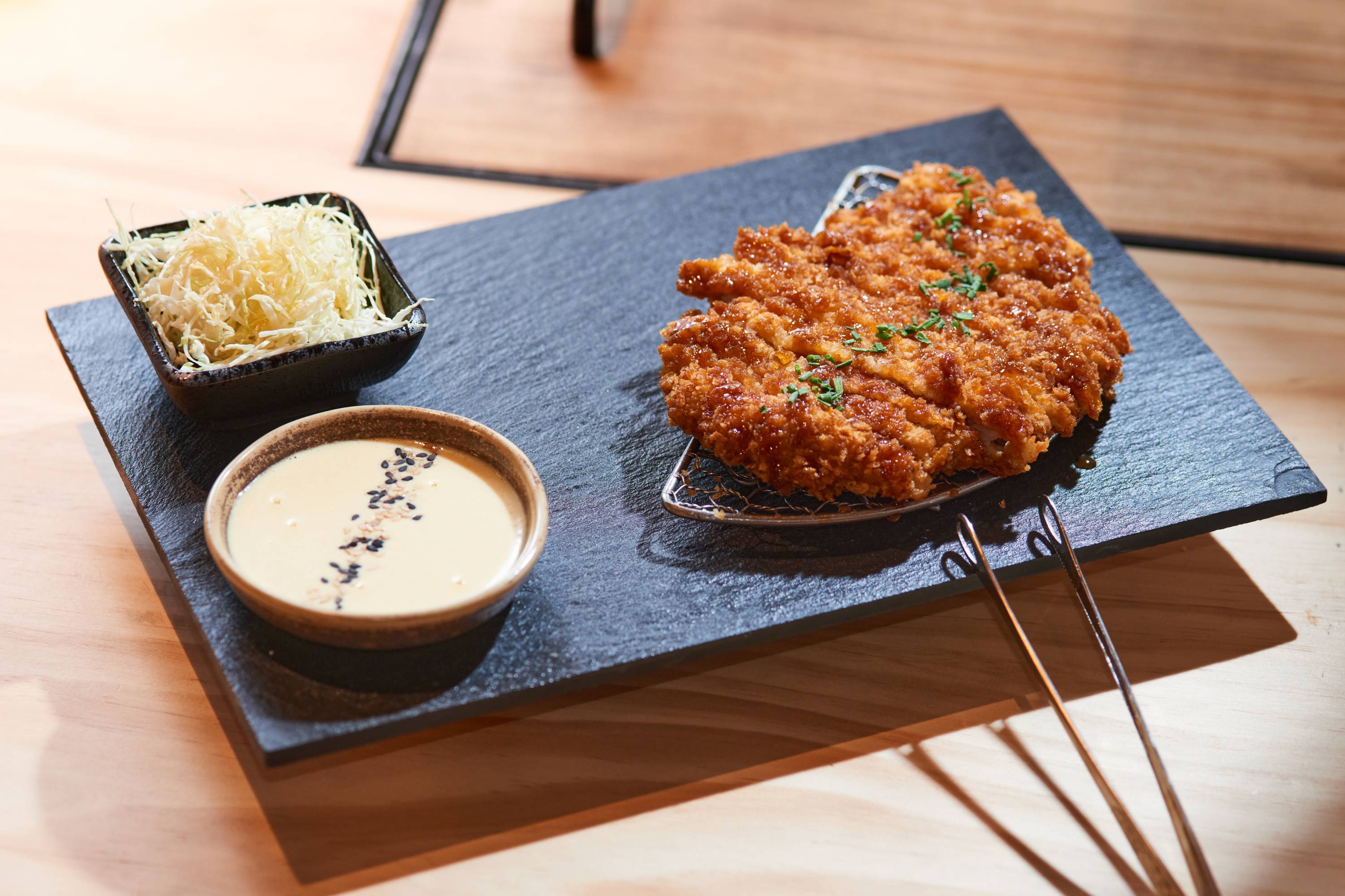 Born in 1987 in Algeciras, his first contact with the stove were his maternal grandmother's stews and her love for cooking. The habit that most marked him as a child was the slaughter of the pig: a harsh ritual that gave him what he calls "the flavor of his childhood": meat cooked in firewood and stuffed into bread.

At 15 he was a kitchen assistant in Tarifa. His summers were washing dishes, preparing salads, cleaning fish, grilling meats, and cooking rice. At 17, he combined his studies in Granada with the Hotel Alboran in Algeciras, where he worked as a waiter and learned the art of serving.

At 18 he paid for his studies working in two bars in Algeciras, one of them the Bar Ivory, where he met Tili, his first teacher. At 23, he went to London as a cook to discover the bitter side of the trade - poor service, poor product and low wages - and came back to Spain five years later with a clear objective: haute cuisine and Madrid.

At the Aranda school he learned new techniques with Fran Rabazo. His talent earned him an internship and later a contract at El Club Allard —2 Michelin stars—, where Jose Carlos Fuentes, Carme Ruscalleda's right hand man in Tokyo, introduced him to Japanese cuisine. There he led his own team and proposed his first dishes for a tasting menu.

Two years later, he joined Étimo as second in the kitchen, with Begoña Fraire, where he applied classic cuisine française techniques with the highest quality ingredients. From Jairo Calvo he learned precision and discipline in the execution of recipes and the treatment of the product.

It was then that Chiho Murata's call happened and her proposal to run Pilar Akaneya. He moved to Barcelona for training and work on Murata's ideas for Madrid, such as bringing Crown Melon, Wakayama charcoal and cooking with Kangen water. With the vision of offering the best Sumibiyaki experience, the commission to make the Sansekai Menu was born. “It brings together all the values ​​that I have learned. Chiho gives me guidance and confidence. Working with her is easy and it shows in the result. I must confess that working has never been so rewarding before. To see customers' eyes shine, or hear them say, "We have been happy." There is nothing like it ”. 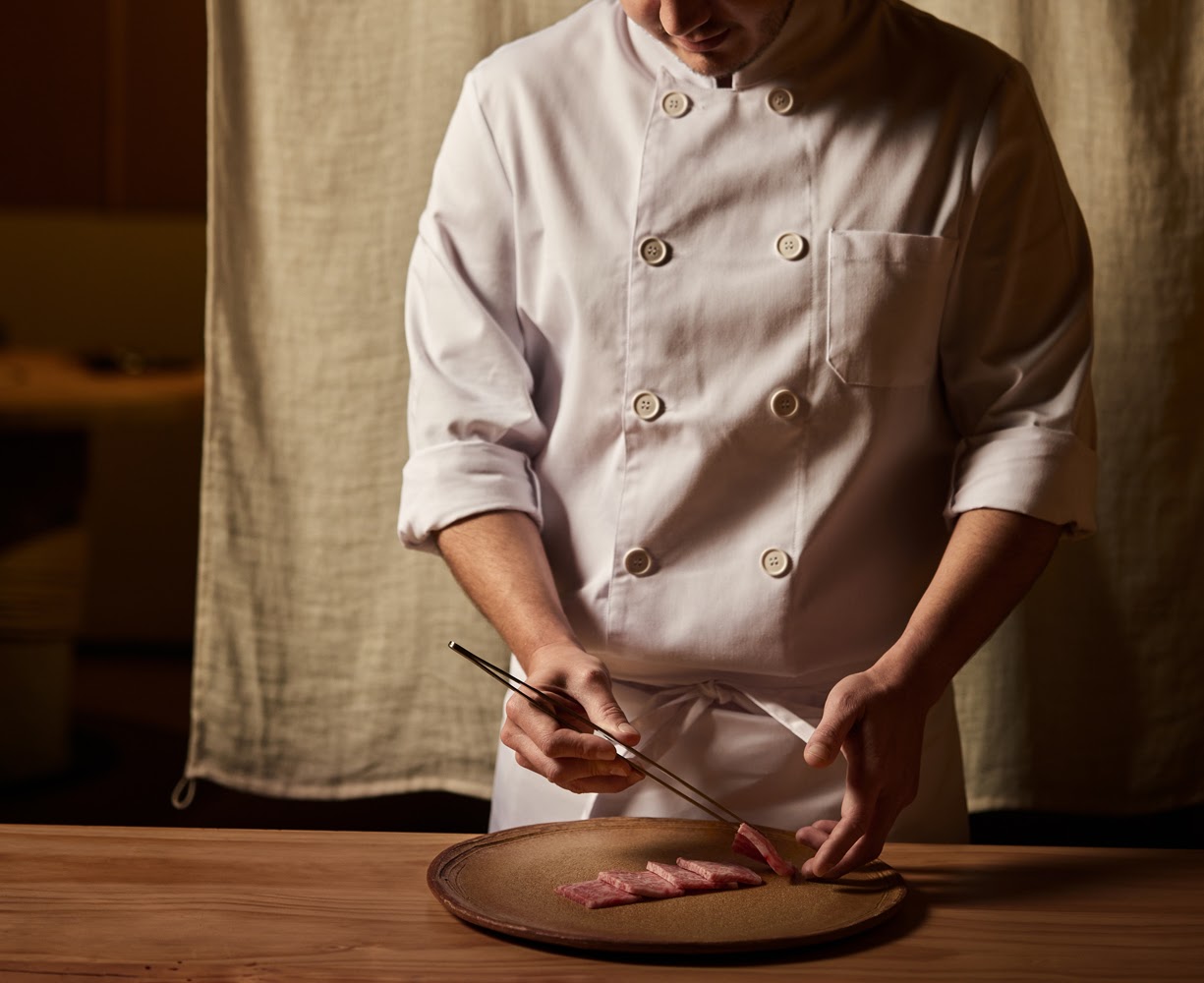 To make their barbecue tables, Pilar Akaneya chooses woods for their decorative surface, called keshōmen (化粧 面), as opposed to hardness or other attributes. Sometimes wood exposed to heat breaks, forming a large scar. As with the kintsugi (金 継 ぎ), a Japanese technique for fixing ceramic fractures, the shokunin (職 人) or Japanese master craftsmen respect the deterioration of the wood and, to repair it, they praise the damage instead of hiding it or masking it. It is the wabi-sabi culture or the beauty of imperfection, where aging, wear and tear embellish the object, highlighting its transformation and history, and that is precisely what was achieved at the tables of Pilar Akaneya by Julio Alonso, the Only authentic shokunin from Spain. 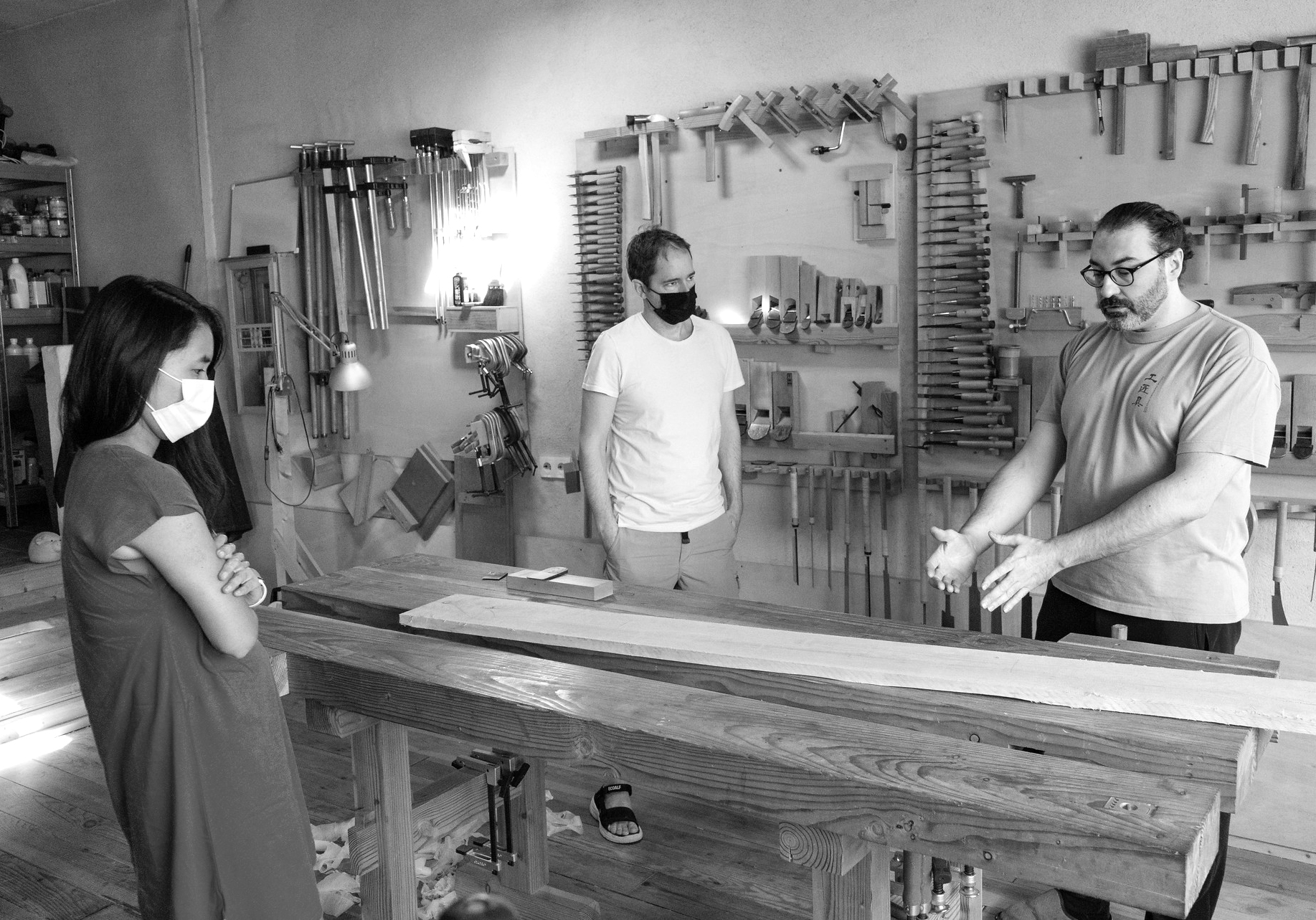 The true shokunin works in the style of the Japanese artisans of the Edo period, called sashimono (指物), this technique involves using only noble wood and joining the components without metals such as nails, screws or elements other than the wood itself, and with complex assemblies that don't even require gluing. Alonso, trained in Japan with the actual Yutaka Mogami and Yuji Funatsu, top living references in cabinetmaking and blacksmithing, respectively, has dedicated his last 20 years to the study and teaching of sashimono. Chiho Murata sees Julio as a national treasure: “He is the best Japanese cabinetmaker in southern Europe. We can only express our gratitude for having blessed our restaurant with his work. Julio is not someone you can hire. He chooses you ”. 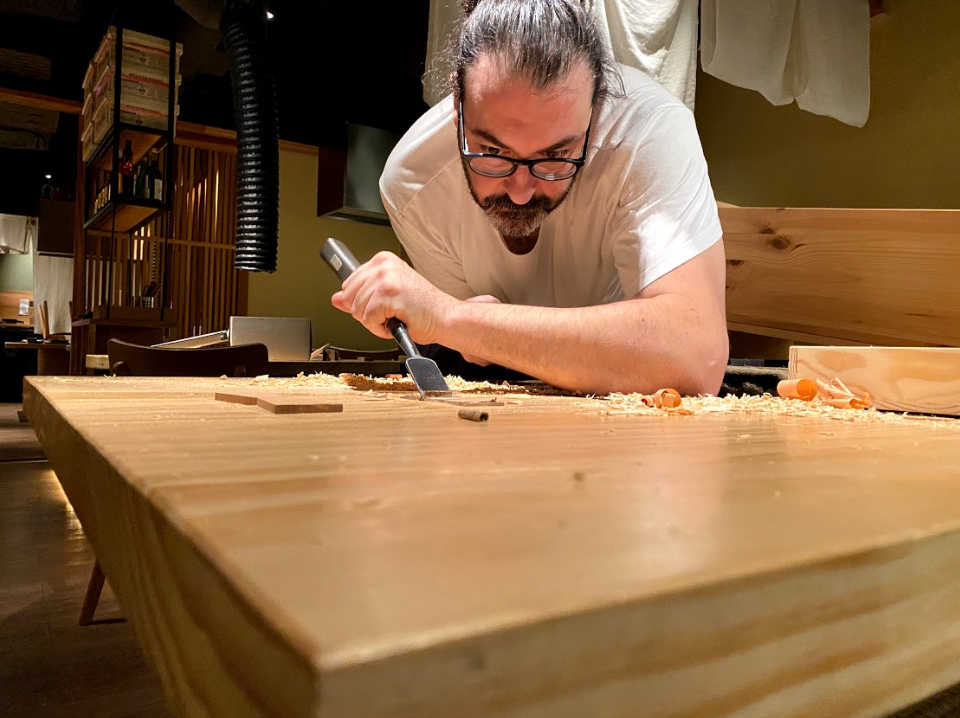 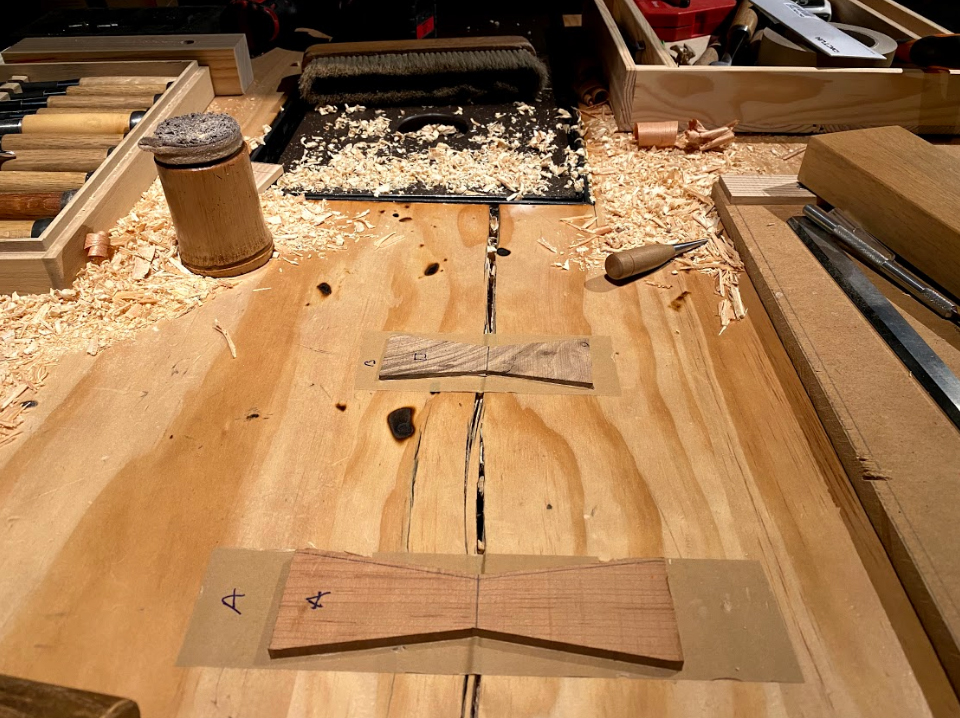 There is something about Kyoto that inspires Pilar Akaneya. The name Kyoto itself makes you breathe more deeply. Its beautiful scenes, sumptuous cuisine and calm rhythm make it easy for you to enjoy every moment. The Tawaraya ryokan, the Ogata restaurant, or strolling through Shirakawa Gion and Shinbashi Dori streets represent the very essence of beauty, sometimes unnoticed for lacking any pretense. The simple and rustic architecture separates you from the overwhelming outside world and plunges you into an almost meditative state.

Pilar Akaneya transfers this harmony with nature to its cutlery and dishes, using simple metals and woods adapted to each need and season of the year. There are also used carefully selected rustic ceramics created by Japanese craftsmen. Japanese artisan tableware stands out for its delicacy, resistance and exquisite shapes. For the chef's menu, he chooses unique pieces from the Yuu workshop in Barcelona, directed by the artist Motoko Araki. Using traditional methods, Araki takes time to make each piece. He begins with the good kneading of the clay in the original Japanese way and continues with the creation of the form using the lathe. Each piece is left to dry for 8 hours before glazing and firing at high temperature for another 14 hours. The resulting colors, shades and shapes give Japanese tableware and diners a sense of Zen beauty and well-being. 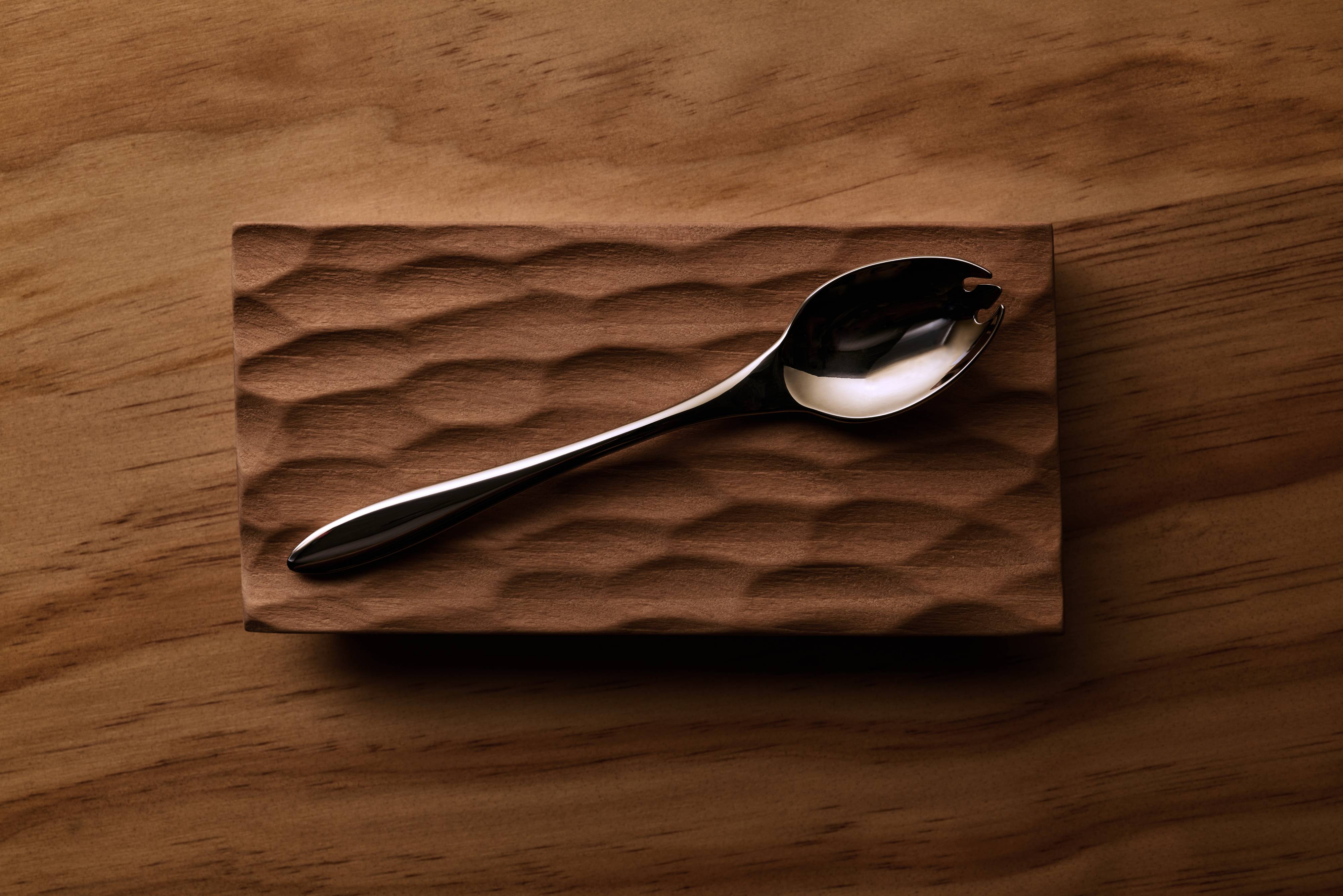 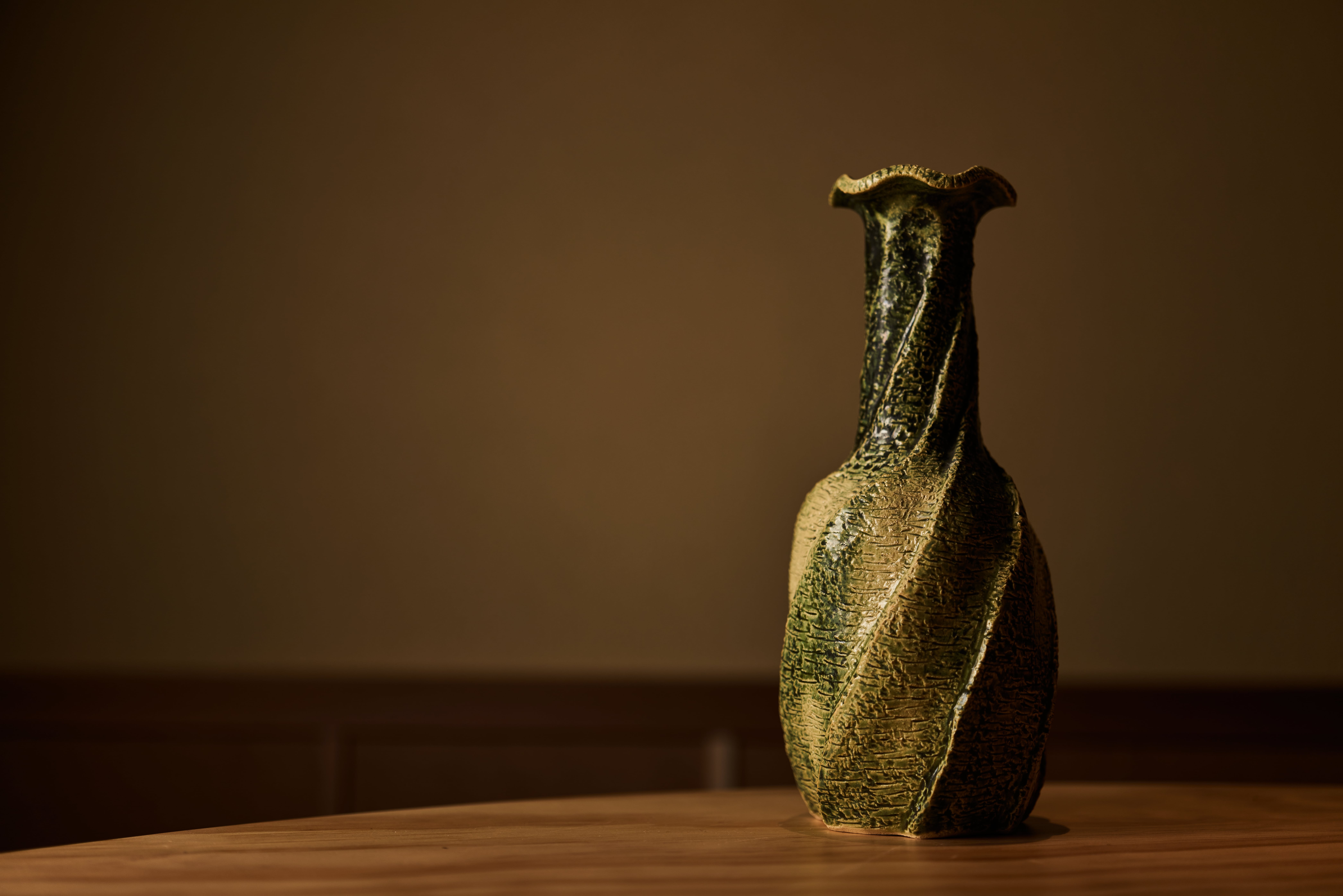 Each menu is similar in quantity and time. The price difference is in the product. 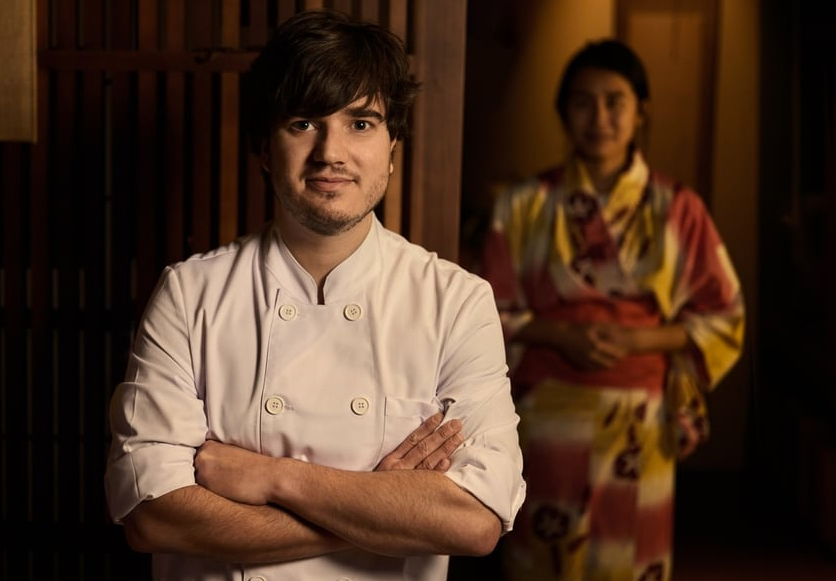 To book a table you must accept the following Reservation Conditions.

Thank you! Your submission has been received!
Oops! Something went wrong while submitting the form.
invisible anchor 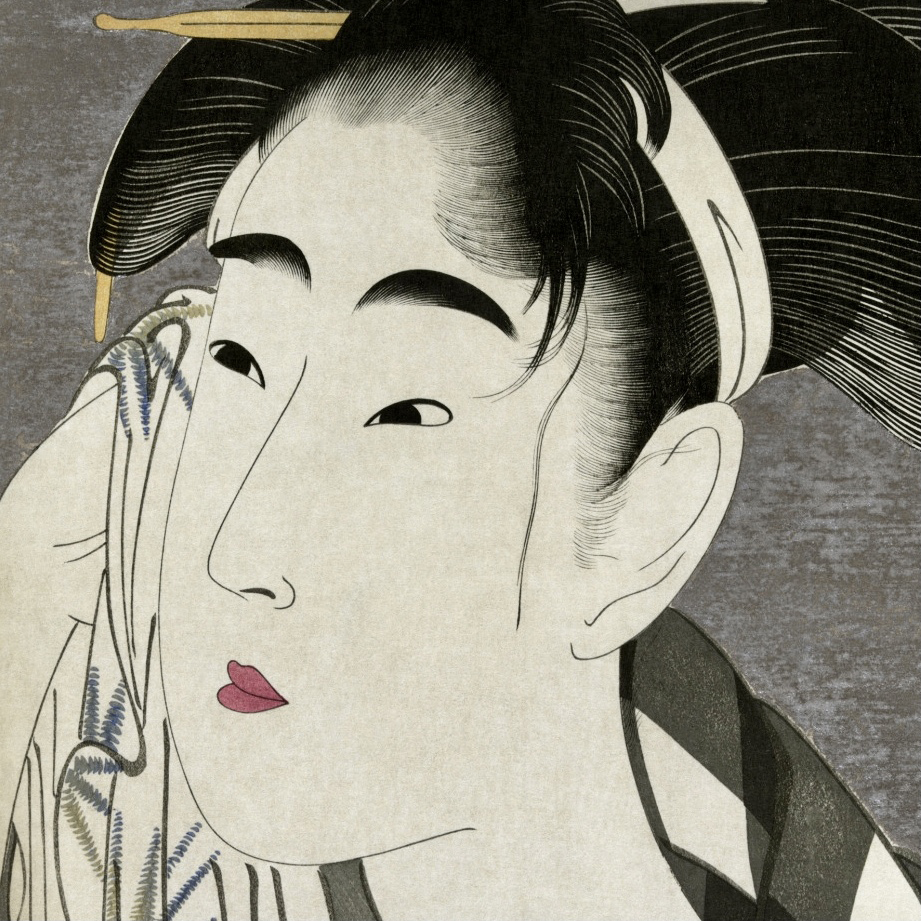 Opens every night at 19:30 for dinner and for lunch on Saturday and Sunday.

If you wish to purchase a gift voucher email us to reservas@pilarakaneya.com